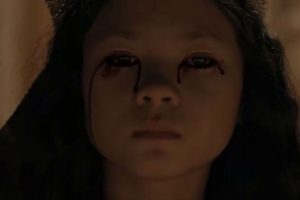 The Devil does not shy away from telling it like it is: It is this lazy and arrogant deity that is cause of the spread of all things evil in this world.

There is wisdom in it, regardless if it had come from one whose tongue is forked, the unclean, the Son of Perdition residing in the body of a little girl.

Much can be said of Erik Matti’s “Seklusyon” and definitely “thought-provoking” is at the top of the list. Taken at face value, the movie is a visual treat. Its texture is rich and leads one to be deceived that he or she is within the film’s era, the chaotically-ambivalent late 1940s.

Rife with religious spectacle, the viewers are brought almost unwillingly into our ancestor’s unforgivable mania and submissiveness to the fangs of Christianity. In Matti’s 1947, the Philippines seems to be recovering from the clutches of both Spanish and Japanese colonization; blindly searching for its identity as it tries to heal its wounds through the power of faith. 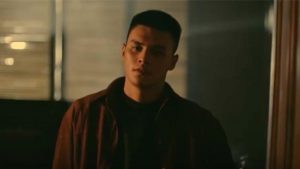 In the center of it all is a young deacon by the name of Miguel who, along with three other deacons, Carlo, Fabian, and Marco, have gone into seclusion in a remote convent in the province. Isolation of these young priests-to-be are made within the last seven days of their training. It is during this period, in accordance to the lore of Secular Christianity, that the Devil will try to lure them into sin. As such, the House of Seclusion is meant to bring them to spiritual stability through the trials of the mind and the soul.

In another far-off province, news of a miracle child had shaken the fortunes of their destitute barrio. A little girl named Anghela Sta Ana has been healing the sick of their maladies. As the disease dissipates or injuries becomefully-repaired with her mere touch, Anghela lets out a thick-black vomit which her charge, the young Sister Cecilia saves in small glass jars.

When Anghela’s exploitive parents are mysteriously murdered, Padre Ricardo, a priest sent to investigate her miracles, recovers her bloodied and distraught. Under the Bishop’s advice, Anghela is brought to the House of Seclusion where the young deacons are sent for their final engagement.

What ensues is a stuff of nightmares taken out of the deacons’ past sins distorted to the Devil’s delight.

The movie “Seklusyon” is an intelligent curiosity of many layers stretching from the critique of fanaticism to the Filipino people’s penchant to blind political veneration.

Rather interesting is the screenwriter’s choice of delegating the role of the Devil Incarnate to a little girl. This echoes the backward mindset that females are far more susceptible to the Devil’s temptation. Compounding this further is the little girl’s chosen ally, Sister Cecilia whom have been initially expected as the Evil One.

The role of the two accomplices are that of the Serpent (Anghela) and Eve (Sister Cecilia). Eve is seen here as the temptress who had lured the not-so-innocent males acting as the deconstruction of the biblical Adam. All of them at the mercy of their own appetite and libido.

The far-off province is their Garden of Eden infiltrated by the Serpent who had challenged them to give in to their earthly inclinations despite God’s disapproval. 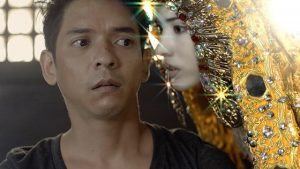 The female power here is seen as an evil force that could distort the world of men. This had also been exemplified by the constant appearance of Miguel’s estranged lover, Erina through the distorted apparition of the Blessed Virgin Mary, an element also present in  Matti’s earlier work, the short horror film, “Vesuvius”.

And while this may be seen by Feminists as problematic to the point of repugnant, the screenwriter’s statement is clear: It is God’s architecture that made man flawed and inclined to sin in the first place. God being purely male: authoritarian and sadistic in all His machinations.

It is in this reading that the discourse could be brought to a political angle.

Free Will and Democracy Are Evil

Seklusyon undoubtedly depicts the oldest Binary Opposition in literature, and that is of course, Good vs. Evil. However, it blurs the lines between the conflicting forces with Anghela’s speech to Padre Ricardo in the movie’s climax. While squaring-off in the House of Seclusion’s backyard, Anghela attributes the spread of evil to God himself as he is, as she puts it directly, “tamad at hambog. . .”  (lazy and arrogant).

Indeed with the deity’s gift of Free Will to the flawed being that is man, he had opened up the door for greater evil. As such, Anghela states further that because of Free Will, the champions of evil can easily propagate and proliferate their influence on mankind.

So how does this configure to the state of Philippine politics? Simply put, Democracy, in the wrong hands, spells disaster. The film indirectly states that the Filipino people have the penchant to abuse the democracy they won for themselves by electing leaders that only cheat them and deprive them of their Democratic rights. 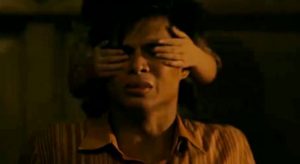 The God persona, as he is usually invisible in terms of depictions in most religious and horror films, is representative of our blind faith and lack of scientific analysis of political events. We are often led into believing false prophets that only bring us doom, and ultimately, our destruction.

The right to Free Will, in this movie, causes us to fall for the Devil’s inventions. It is always our misguided sense and desire to a Democracy that we do not fully understand that leads us into electing power-hungry leaders.

In the end, Miguel, who shares the name of the Archangel who vanquished Lucifer in Christian Mythology, slew Anghela in an attempt to save the church from the Devil’s clutches. But of course, it is all too late. Her evil had already spread well through the young deacons who were christened into priesthood. And as with the doom that usually falls upon Filipinos, we often cheer with blind delight for leaders who would bring us into shambles.

As Anghela had said unto Padre Ricardo:  There will come a time that you would no longer know what is right from wrong.

Aren’t we already living in those times? 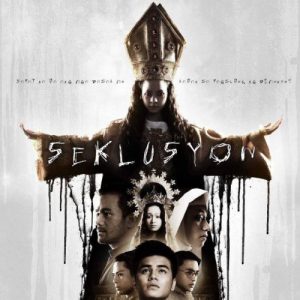