New “Justice League” Photo Released: What Could It Be All About? 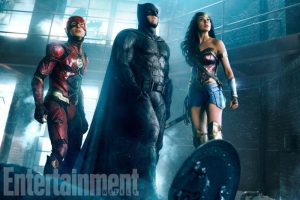 They might not be the Trinity you’re expecting, but hey, beggars can’t be choosers. And besides, 2/3 of the original trio is present and The Flash’s costume does espouse a lot of geeky conversations.

DCEU fans everywhere had been teased yesterday with a set photo of the “Justice League” movie with Batman, The Flash, and Wonder Woman. But apart from the obvious, two pressing questions may be asked regarding the photo’s composition.
1. Where exactly are these Leaguers? And,
2. What are they looking up at?

What might give us a clue as to what is exactly going on in the photo are the recent reports that the team might be dealing with Parademons in the film.

What are Parademons you ask?

In DC comics, Parademons are a group of monstrous extraterrestrial shock troops enslaved by the cosmic warlord, Darkseid to maintain order in his planet, Apokalips.

According to various sources, in the “Justice League” movie, these Parademons have reached Earth and have found their way into Gotham City. It is presupposed that in the photo, The Flash, Wonder Woman and Batman have followed the Parademons through the Gotham City Ventilation Tower after receiving intel from Commissioner Gordon. Aboard Batman’s new vehicle called, The Crawler, (a spider-like car that can climb up walls) it is in the ventilation shaft that they find a horde of these abominations.

But something had happened in the shaft that immersed The Crawler in water, leading the three heroes to climb up and maintain ground atop it.

In “Batman V Superman” we had been teased with these Parademons, (should these be really the movie’s interpretation of them) through Bruce Wayne’s dream/premonition sequence. There, a swarm of Parademons had assailed what appears to be a military camp of some sort in a sand land of an unnamed country.