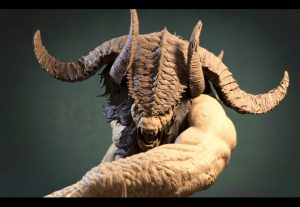 Mr. Emre Ekmekci is one voracious artist. While his pieces over at ArtStation are already more than worthy of praise, he is indignant—thirsty even—to learn more. And that is an attitude that each individual, wanting to enter the industry should possess.

It is easy to say that Mr. Ekmekci has talent. Definitely. But the discipline that he had undergone, the willingness to learn more despite his already considerable education, that’s what is really admirable. It is empowering to read through his experiences. We are invited to pursue our craft further with Mr. Emre Ekmekci. In a sense, (probably even THE essence of this write up) is that he contributes to the further development of the industry. We couldn’t be more thankful.

Being able to conduct this interview with Mr. Ekmekci is truly an honor.

Xeno Creatives (XC): ZBrush technology definitely changed the ballgame. It widened the avenues of expression, technique, and style for 3D artists. What processes did you have to learn to be skilled in it?

Emre Ekmekci (EE): Before getting familiar with ZBrush I used box modeling in Maya to create characters for games. This was a pain since I mostly created organic models so I knew I had learn ZBrush sooner or later if I wanted to take my art to the next step. I learned ZBrush in graduate school back when I was mostly focusing on 2D concept art. I found that using ZBrush made me come up with more ideas—faster and with more realistic results than just concepting in 2D. In order to learn the tool initially, I took a couple of classes in school from very talented artists. I learned both the basics of the program and how to shape and use ZBrush according to my needs—whether it be character design or modeling. I continued learning the tool from online courses, other great artists I interact with and, of course, keeping up to date with the industry by going to conferences or following ZBrush Summit talks. 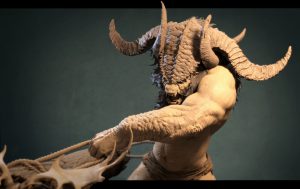 Although I now feel very comfortable with ZBrush which I use daily, I still try to learn more about it so that I can improve my art further using this tool.

XC: Being a dedicated artist as you are, how did ZBrush help you further your art?

EE: Coming from a 2D background and not having experience in traditional sculpting, ZBrush changed the way I look at character design drastically. Getting into ZBrush made it possible for me to see the characters I do from different angles, opening up new possibilities for me in terms of my art which led to the evolution of my designs. The fact that it’s so forgiving compared to traditional art and yet sophisticated enough to produce fascinating artworks, make ZBrush unique for me.

I can also certainly say that ZBrush helped with my 2D skills aside from 3D. Interacting with the characters and creatures I design in a 3D medium gave me the chance to comprehend the said characters with a sense of depth and dimension. So it’s fair to say that ZBrush had a positive impact on my artworks overall and the way I look at design. 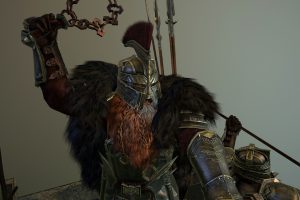 XC: What made you decide to focus on ZBrush as a creation medium? Are you still planning on venturing into other software?

EE: I’ve always loved animals, dinosaurs and any kind of cool organic creatures in movies and games. Before I even heard of ZBrush I designed creatures by simply sketching and illustrating, which I still do sometimes. But when it came to modeling I needed a better tool than just low poly box modeling tools. I needed a tool that would allow me to transfer the flow of forms that I have in my mind into the digital canvas, thus reflecting a more accurate representation of what I had in mind when I designed a creature. That’s where Zbrush came in for me. After getting past the interface, which was a little daunting at first but easy to customize and efficient to use later, I could not only represent my ideas in a comfortable and as a whole but I also started improving my design process since it was much easier and faster for me to come up with ideas in Zbrush. So it is a very efficient tool for me for modeling and concepting as is the case with many artists.

I do use other software in my character/creature creation pipeline such as Photoshop, Maya, Marvelous Designer and Substance Painter but Zbrush is definitely one of the most important steps I have in my workflow, and certainly my comfort zone. 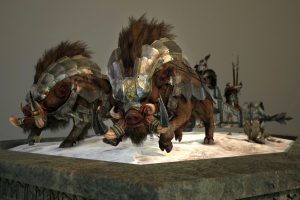 XC: Do you have to be good in human anatomy when working with ZBrush?

EE: It depends on what you are doing in ZBrush. If you are modeling humanoid creatures that even vaguely resemble humans, then I would say yes, you need to have at least a basic understanding of how the muscles and skeletal structure beneath it work. If you really want to get creative and have fun, I would suggest learning anatomy as best as you can and start twisting and reshaping certain parts of the body in order to create something entirely new and unique while still making sense physiologically.

XC: Do you see yourself working in the movie and television industry?

EE: I have worked in the television industry before as a creature concept artist and I had an entirely pleasant experience. It primarily depends on your client as well but I like how the artwork and designs created for film are somewhat different than those for games. Although I really like stylized designs, my principal path has always been for realism. And since the television and movie industry are mostly shooting for realism and unique designs, I do enjoy working for such projects. 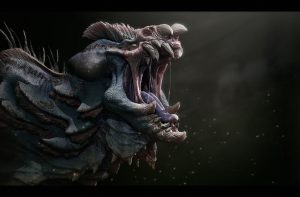 XC: Was your craft really a passion to begin with or just something that pays the bills?

EE: Creating creatures and characters has always been a passion for me since I was a kid but it wasn’t always the way I paid the bills. I majored in software development in college and haven’t thought of making a living out of my passion prior to graduation.

Now I am just getting paid for doing what I have always done. My passion about creature and character art keeps evolving and developing as I interact with other artists, getting inspired and keeping track of new technologies and workflows in the game and movie industry.

XC: There is no other way of putting it, but we absolutely are in AWE of your works on ArtStation and Facebook! Your concepts are just plain cool. They’re all good, but do you have favorites? What are they and why? 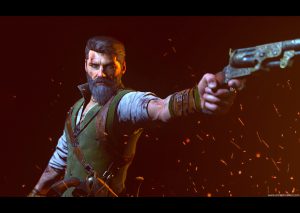 EE: Thanks a lot for the kind words! When I look at my works I mostly see the stuff I need to work on. But overall, I can say I am pretty happy with how the Gunslinger and Atarka Pummeler turned out. I can easily say that Gunslinger was the most challenging and Atarka Pummeler was the most fun. I made them as practice for online workshops I have been involved in. I believe everyone has things to learn from others whether it is through classes or personal interactions. This is why I try to get my hands on every good tutorial and class out there if I have the time.

The reason I like Gunslinger and Atarka Pummeler best is because I learned a huge deal while working on them. That sense of artistic development kept me going throughout each project and pushed me to have the best results I could have with that fresh knowledge. I know that now I can create even better artwork and have more fun but I have still so much to learn.

XC: Who do you consider your influences? What attracted you to them? 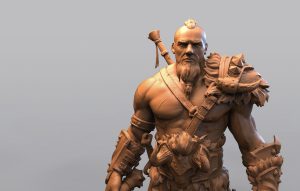 EE: There are endless ways to get influenced. I have many influences involved in many different areas of art. The people that inspire me are illustrators, sculptors, photographers, even musicians and authors. But all these people that inspire me with their work to create better art have something in common which is unique ideas they have. Something that have never been seen before, or heard or read before is what really inspires me. To be more specific I have been amazed and inspired by the works of artists like Bernini, Michelangelo, Frazetta, and Tolkien. For me one of the best ways to learn and improve is to mimic the works of such masters. As for more modern inspirations, I would say the works of artists like Carlos Huante, Nick Keller, Simon Lee, Aris Kolokontes, Adam Skutt and many more help me push my limits.

XC: What other pieces do you still want to create? 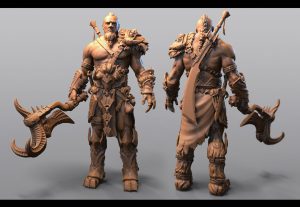 EE: I want to continue creating creatures as much as I can since it’s more like meditation for me rather than work. I also want to get out of my comfort zone a bit more and learn more about the technical aspects of creating game characters, PBR texturing, and hair for games. I look forward to create nice anatomy models one day if I have the time too but for now I will keep studying it.

XC: Do you also see yourself in Game Character Design?

EE: I did Game Character Design and just like any other good concept design, it requires unique ideas to be satisfying. That aspect of any design work is the most appealing thing to me. Having said that, concepting for games is mostly about the design and design only because of the limited time, and most game concept artists don’t get to create beautifully rendered art pieces of characters. Although TV and movie concept artists also have strict time limitations, I like the rendering aspect of it as well, on top of a good design that is. But the bottom line is, I like designing for both game and movie industries and would be interested to do it more.

XC: If you weren’t working as a 3D artist, what do you think you’d be specializing in instead? 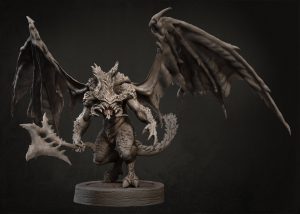 EE: I would focus on 2D concept and illustration for games and movies. I would like to try new traditional methods and techniques while creating my artwork.

XC: What advice can you give individuals wanting to enter the industry?

EE: My biggest advice is find out what you are good at, your real passion, your specialty and keep on practicing! It is good and necessary to have variation in your portfolio but don’t lose track of what you really want to do. At the end of the day you will make a living with your talent and you don’t want to work on something you don’t really like every single day. Networking is crucial to land on a job but portfolio is equally if not even more important. Get advice, interact with other artists not just for the sake of networking but to really learn from them. It’s a tough industry and it is getting tougher by the day but the sleepless nights will pay off when you realize you are making money out of your passion.

Mr. Emre Ekmekci, we thank you for the time that you had extended to us. We are hoping that you will find further success in your craft and that aspiring individuals will acquire the same attitude that you possess.