Balancing on Tight Ropes: The Art and Discipline of Mr. Aleksandr Kirilenko 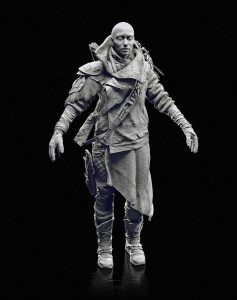 Having being able to experience being a standalone artist and a leader, Mr. Aleksandr Kirilenko is working toward being able to balance both interpersonal and intrapersonal aspects of himself when dealing with artistic endeavours. He knows his inclinations and exerts the best of his efforts to hone only what is beneficial.

When asked about the challenges that he encounters daily, given that he already works as a Lead Character Artist, he has this to say:

“To me it’s organization and communication.

As an artist, I tend to live in chaos. That doesn’t mean that my room is a mess or things are falling apart around me. Structure is the opposite of the formless mess from which all ideas originate. The two have to work together though, if the goal is to be productive and successful. It’s this balance and the dialog between the two that I’m working on.”

Honest and true to his craft, Mr. Kirilenko is an artist we can entrust the craft to. He is an artist whom we should all watch out for.

Xeno Creatives (XC): Has producing 3D art always been a passion for you? How did your involvement in the 3D industry start? 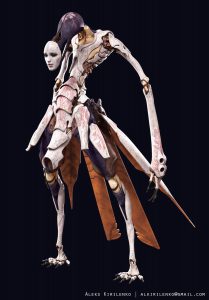 Aleksandr Kirilenko (AK) I can’t say it has always been a passion, but it has been a fairly steady fire burning inside of me since age fifteen. That’s roughly when I got my hands on one of the 3D programs that were popular at the time. Until then, I hadn’t had a clue what 3D art was. For whatever reason, the digital aspect of the art form clicked and that’s how I got hooked and got in. I simply enjoyed modelling objects in 3D space when I started. I’m afraid there isn’t anything more to the story than that.

AK: I believe I have a place in the industry but how solid it is is a different matter in itself. I no longer work in a studio, so I don’t know what’s the next upgrade or perhaps a revolution in character art development is going to be, what tools are being introduced and so on. Being a freelancer, I don’t get to post my work for some time, nor the projects I’m working on too. The feeling of being active comes mostly when I meet like-minded people or give a talk somewhere. That’s always a lot of fun and I’m grateful for such opportunities.

XC: Who or what influenced you the most going into 3D creation? Was there an art piece (digital or otherwise) or artist who led you to decide that digital art production is something you would be doing for the rest of your life? 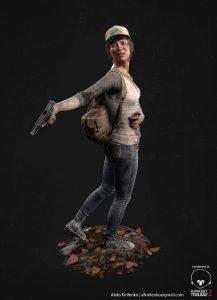 AK: Such a timely question as “Diablo 4” had just been announced. I started doing 3D around the year 2001-2002, about two or three years after I got “Diablo 1”. I remember being in awe at the cinematic intro. I couldn’t tell what it was, as I said earlier, I had no clue about 3D. But I understood that it wasn’t real life acting and it wasn’t a drawn cartoon either. It was something special.

Almost every cinematic from Blizzard has been a reminder of that to me. The latest trailer for “Diablo” is indeed a step-up. What a bunch of amazing artists!

AK: I work as a lead character artist so I do a lot of managing work these days. I still work on character assets, but it’s roughly thirty per cent of the work I do on a day to day basis. The rest is managing a team at Fox3D, giving feedback, tweaking schedules, talking to the client and making sure everybody’s happy.

XC: What are the common challenges that a 3D artist like you encounters daily in a project?

AK: To me it’s organization and communication. 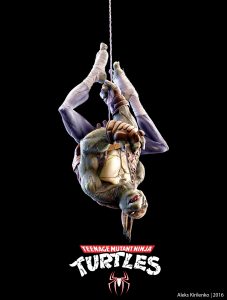 As an artist, I tend to live in chaos. That doesn’t mean that my room is a mess or things are falling apart around me. Structure is the opposite of the formless mess from which all ideas originate. The two have to work together though, if the goal is to be productive and successful. It’s this balance and the dialog between the two that I’m working on.

Communication and interaction with others is another rope to balance on. I started my career as a freelancer, away from other people. And I’m an introvert though I don’t have problems talking to people. I’m comfortable in this and don’t shy away from a conversation. Having been somewhat irresponsible with developing my soft skills in the past, however, this sometimes creates a situation where I need to take a deep breath to see what is truly going on. That also plays a big role in being a leader. It’s a position where you need to know yourself very well and be very attentive to your own emotions and ego. Getting emotional and taking things personally will only bring trouble. I can’t detach myself too much, either, because this will seem like I simply don’t care about the issue a person might have. Same thing with the ego. If I let go of it too much, I simply become powerless. If I let it take charge, I could create conflict with somebody who knows more about something than I do because ego sees it as a threat. There is a lot of dichotomies about being a leader, or a person for that matter, and it all boils down to paying attention, learning and becoming wiser every day. 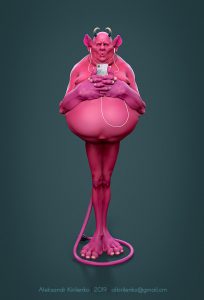 XC: We’ve seen your works online and we like your style and take with popular characters. Do you have favourite pieces? If so, what would these be and why? Also, what would you consider your biggest or most exciting project to date?

AK: Thank you. I think my favourite one would be “Mort The Demon”. This was an unintentional follow up to my “Fred The Mushroom” who for the longest time held the gold medal in my own eyes. I like simplicity and I love form. Mort was an exercise in both. The final image came out of nowhere, too. I never planned him to be such a charismatic demon.

My most exciting project is actually not the biggest one. It’s a collaboration with Mikhail Lapshin on the reconstruction of a relief on one of the buildings in St. Petersburg. The relief is a statue of Mephistopheles that was destroyed in 2015 by some activists. I was responsible for doing the digital double of the statue based on a few photographs that were available online. Mikhail, in turn, was in charge of 3D printing of the model and doing all the preparations for mounting the mischievous guy back onto the building. The whole project was fully his initiative, too.

Unfortunately, the local authorities had an issue with it, so, for now, the model is located in a museum. I’ll make a post about this on my website fairly soon. 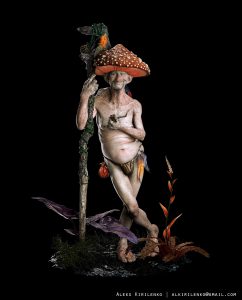 AK: That would be my understanding of form. I love clothes and fashion. It’s a perfect field to play with forms so I developed some techniques and tools specifically for that. I’m also very meticulous when it comes to my work. I don’t let sloppy results go through and can revisit the same areas a number of times. I simply like doing things well.

XC: If you weren’t a 3D artist today, what would you be working as?

AK: Great question. An architect, a writer, a psychologist, a teacher, a fashion designer, a jewelry maker and so on. I would be anything that has to do with art, psychology and philosophy. I would never be a classical scientist or a pilot. I simply don’t have a knack for those. I’m not saying that I would be great at those other things listed above, but at least they are closer to what and who I am. Luckily, being a 3D artist allows me to explore the things that I like and that are somewhat outside of what I thought my work was about. The future is an exciting place. 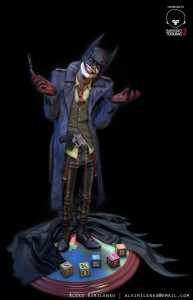