Lessons In History: Why History Channel’s “History Con” Wasn’t All That

The subject of history usually comes off as something, err, boring.

Too many dates, too many people who are already dead, and too many interrelations that seem to bear no relevance to your personal life; Rizal could have sparked a revolution with his novels but that ain’t gonna help you get that girl. Well at least that’s how the common guy or gal sees it. 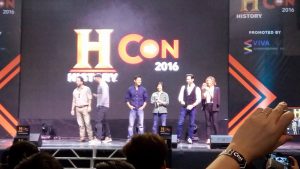 That’s why it came as a surprise that History Channel’s History Con had received great commercial mileage and had been widely-anticipated.

Entering the halls of the World Trade Center in Manila, I was surprised that the unfolding event felt more like a car show than a History expo. And no, it ain’t because of the vintage cars or the high-heeled women wearing what appeared to be refused clothing that hung above their creamy-licious knees (Inappropriate. I know). 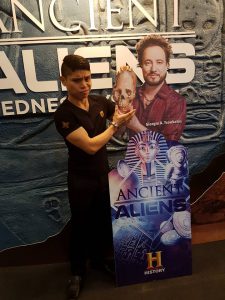 The event had a vibe of youthfulness to it. It didn’t feel like your teacher’s recommended field trip that required a boring reaction paper. It was festive. The people lined-up to get pictures of History Channel’s celebrities like Giorgio A. Tsoukalos who’s known as that guy who believes that all human innovations were caused by ancient alien visitations.

Yes the party’s right here, and everyone wants a piece of the cake.

Comprised mainly of exhibitions and booths of History Channel’s shows, one would think that he or she had wandered into prime time cable. We were easily caught by muscle and luxury cars that would make even the likes of Ian King, (or is it Angelina King now? Don’t really care) a run for his money.

Here and there, athletically-challenged geeks try to pose with assault rifles displayed by the Philippine Airforce; each of them trying to guess how to properly handle one with the pretense of testosterone as their buddies struggle to snap Facebook photos. 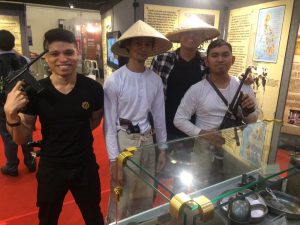 Some had taken their cosplay game up a notch by role playing Japanese and Filipino soldiers for their World War II exhibition. Curiously enough, a solo booth had been catered to Katanas of Feudal Japan. Can you say, Japanese atrocity? I sure can. Moving on.

What had really taken me aback, (and trust me, this ain’t because of amazement) is the reception of the Bataan Death March Exhibition sponsored by Veteran’s Bank.

Sure, History Channel’s car-based-reality TV show is much more appealing as it features, well, CARS. But the presentation of history relevant to the Filipino people should have been the piece de resistance. After all, it IS a History convention. Heavy in text and rich in facts, the Bataan Death March had gotten little patronage. Believe me when I tell you that the found-objects/treasure-trash/90s vintage collectibles had more patrons, I mean who could refuse taking a selfie with a “Back To The Future” hoverboard? HOVERBOARD people. NOT that cheap-ass, lame, wheeled knock-off that screen junkie kids are so crazy about. 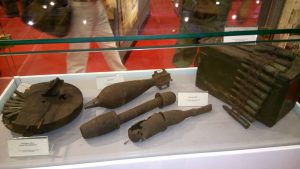 Encased within glass are actual shell casings and debris from the second World War, accompanied by literature rarely read by ANYONE. On top of that, an actual war veteran, a Guerilla of the 44th Hunters Division ROTC who served and survived the Filipino-Japanese war made a visit. With the years taking much of his musculature and ability to stand and walk upright, he was led to the exhibition in a wheelchair. He struggled to read the write-up that he himself had personally experienced. 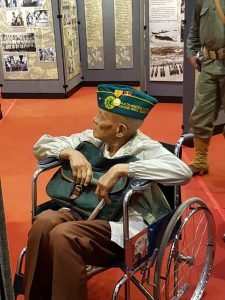 As with the artifacts and long texts lining the center of the entire expo, little took notice of him, as the generation preferred the more colorful exhibits rendered in youthful expressions.

Trying to go about it gently, I’d say, little care is given to actual vanguards of history. We are a people of historical amnesia. The late Rene Villanueva, children’s story writer and playwright in his historical play, “Kalantiaw” had said,

Given the current political state of the country, when even the highest official in the administration would casually express his desire for Martial Law, we are indeed lacking in historical regard.

Don’t get me wrong, I think History Con was an outright awesome experience. Kudos to the people behind it. But then, patronizing such events make it easy for us to commercialize our own history, devalue it and ultimately forget its many lessons.

In this cesspool that is the Philippine society, it is easy to get lost among the sea of distractions. From our super-reality TV shows to our government officials acting as if they were comic-book vigilantes, we are immersed in a culture of constant escapism. It truly is a challenge to rise above it all.