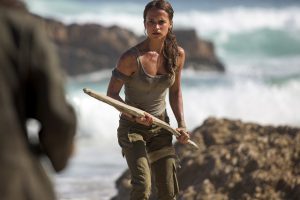 It is no longer a secret that a revitalization of the “Tomb Raider” movie franchise would come in the form of a reboot. And as far as reboots are concerned, no matter how much success the original frontrunner had brought in, new actors would be taking center stage. In the case of Lara Croft, the game and original movie franchise’s heroine, a new actress had already stepped up to take the mantle.

Swedish actress Alicia Vikander assumed the Lara Croft persona in the cinematic retelling of the character’s origins. Photos of her in action had been teased throughout the past months which you can see here:

In an interview with director Roar Uthaug, he divulged information surrounding the movie’s development and production.

Pertaining to how the movie would be different in terms of story and approach, Uthaug had said that the writers had taken elements from various places within the “Tomb Raider” universe. Much of the game’s canon would be recognizable to fans of the game while the story delves deeper into Lara Croft’s humanity.

While the movie’s main influences stems primarily from the 2013 “Tomb Raider” video game, the development team had borrowed from classic survival movies, other action movies and integrated European sensibilities within the narative.

In another report, Walter Goggins who played the ambiguous and shady Sheriff Chris Mannix in Quentin Tarantino’s “The Hateful Eight” had been cast in the “Tomb Raider” reboot as a yet to be named villain. Following Goggins’ success in bringin the Mannix caharcter to life, fans are more than interested to find out who he’s playing in the new film.

This compounds the fact that the “Tomb Raider” reboot is an origin story as it imbues greater interest as to how Goggins’ character would contribute to the development of Alicia Vikander’s.

The “Tomb Raider” reboot comes to theaters in 2018.