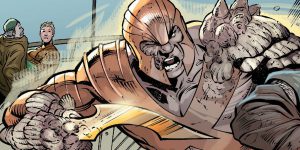 From “Power Rangers” to “Aquaman”, Chinese-Canadian actor Ludi Lin who played Black Ranger is indeed making a jump to another action-packed universe.

Playing the Men-at-War leader, Murk, Lin would be sharing the spotlight with Jason Momoa’s Aquaman. Although a key figure in Atlantis’ army, Murk is also known to shift loyalties. There would be times that he would fight alongside the titular hero but would also align himself with Arthur’s brother Orm, otherwise known as “Ocean Master”

In the comics, Murk was trained and ultimately became the only survivor of the fire pits. After his ordeal, he went on to become the champion of Atlantis’ front-line army and defended Ocean Master against  enemies such as the Fire-Trolls and the Deep Six.

While his methods were not approved by Aquaman, Murk accompanied him on his mission to stop Captain Moller who had been whaling with an Atlantean weapon. Trouble ensued, and while Murk was able to defend Arthur, the king reprimanded him for using brute force.

Ludi Lin had been making waves since he joined the cast in Netflix’s period drama, “Marco Polo”. There he played the stable boy, Batbayer whom Chabi sent to have Kokachin raped.

While no details have yet been made public regarding the movies’ full story, “Aquaman” is slated for a December 21, 2018 release. The superhero adaptation stars, Jason Momoa, Amber Heard, Willem Dafoe, Yahya Abdul-Mateen, Temuera Morrison, Dolph Lundgren, Patrick Wilson, Nicole Kidman and Ludi Lin. The movie is being directed by “Insidious” director, James Wan.