After the controversial and much-maligned death of Katie Cassidy‘s Laurel Lance on “Arrow“, the fans’ renewed interest in the series came in the form of the rabid and unpredictable Big Bad, Prometheus.

But not only that. With the clamor to deliver a more faithful comic book interpretation of the Team Green Arrow dynamic, the showrunners decided to bring in “The Walking Dead” alum, Juliana Harkavy as Dinah Drake.

The apparent successor to Laurel Lance’s Black Canary mantle, Drake quickly caught the hearts of long-time “Arrow” fans. She has the attitude, the mouth, and of course, the Canary Cry.

And now, she is finally getting a costume. After flirting with the idea of suiting up, Dinah would be getting her own vigilante get-up in the Season 6 premier. A long-time coming for the character as she had already played a great part in the team for the second half of the series’ fifth season.

You can see Harkavy’s suit BC suit here! 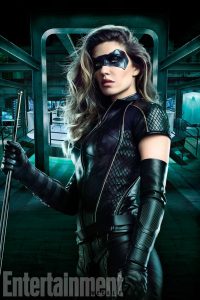