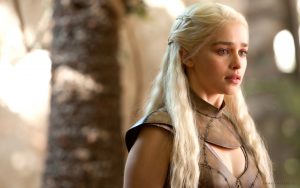 Fan favorite Emilia Clarke of “Game of Thrones” fame is flying from George R.R. Martin’s war-torn and constantly Winter-threatened world to a galaxy far, far away. And we couldn’t help but be excited.

A newbie in the Star Wars Universe, Emilia Clarke joins Alden Ehrenreich and Donald Glover in the yet-to-be titled, Han Solo Star Wars spin-off. The story as we are teased follows the youthful days of Han Solo and Lando Calrissian prior to the chaotic events within the original Star Wars trilogy.

Set to be released in 2018, the Han Solo starrer would be spearheaded by Phil Lord and Christopher Miller, (writers and directors of  “The Lego Movie”, “21 Jump Street” “22 Jump Street”, and “Cloudy With A Chance of Meatballs”)