Gawking at the Geekery of Mark Celtic Buenaventura 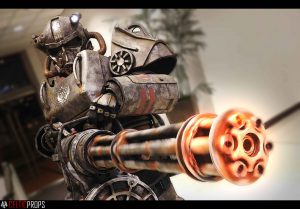 Geek is the new “Cool”. Geeks now have a special place at the cafeteria where even the jocks and the chics want to have a place to sit on. Yes, this is a weird generation and everyone’s enjoying the ride.

The Cosplay subculture here in the Philippines may not have reached mainstream status, but that doesn’t mean they’re not making waves. Last weekend, Xeno Creatives have had a chance to chat with Mark Celtic Buenaventura, proprietor of Celtic Props (which you can find here: http://www.celticprops.weebly.com/) 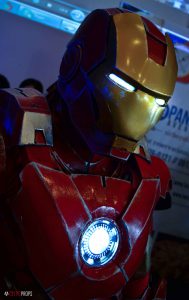 Cosplaying for 8 years, Mark knows the ropes around the culture and to our luck, isn’t shy to share with us what he knows. He creates his own costumes and is even commissioned to create for other Cosplayers. Saying that his works are impressive is an understatement. Let’s get to know him.

Xeno Creatives (XC): Has Cosplaying and creating costumes always been your interest?

Mark Celtic Buenaventura (MCB): In some way, Yes. I’ve always been fond of crafting ever since I was a kid. I used to create different kinds of fancy stuff like masks and weapons out of scrap “Lucky Me” noodle cardboard boxes and document folders. I can still remember, my mom used to help me do the papier mache process because it takes a lot of work to do such individually. Later on, I finish my craft by painting it with cheap poster paint. As I grew up, I took that passion with me and kept it to myself until one day, when I was introduced to this thing called “Cosplaying”. Here, I ventured into a surreal world of artistry and creativity and there, I took my passion to the next level and started showcasing more of my skills to the public and even accept their requested projects.

XC: When did you start exactly? What got you involved? 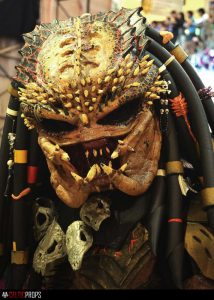 MCB: Pursuing my passion in crafting got me involved and interested to the Cosplay scene. Holding back all my self-doubt and insecurities, in May of 2008 I’ve decided to join a cosplay competition (“The 8th Philippine Cosplay Convention”) in Robinsons Ermita, Manila. I cosplayed as the Celtic Predator from one of the best sci-fi movies, Aliens vs. Predator and I can still remember the difficulty and embarrassment of wearing a cheaply made costume during that time because there’s always been a point where my armor just literally rips-off from itself so it’s kind of like “Oh hey, there goes another part of my wristblades…” and that is why I made a promise to myself that one day, I will be able to make a better set of armors that will never fail me. In spite all that, I can still say that those days were truly unforgettable and that I will forever cherish it for my entire life. 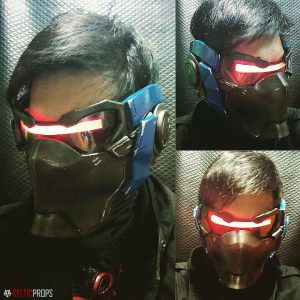 MCB: I am used to cosplaying bulky and heavy typed characters because, I am an admittedly plus-sized person. I needed to choose a character that would fit me in terms of the body proportions. We all know that the public (especially those who are not in the cosplay scene) has keen eyes for plus-sized people dressed up in fancy costumes. Yes, ladies and gentlemen, I am a victim of those as well, making me doubtful and discouraged to cosplay certain “fit” characters that I like. Another factor that I consider in choosing a Cosplay is that the character has to have a compelling and adaptable story for me. It sounds weird but I need to develop a certain feeling or emotion towards the character first and that there has to be a bond between me and the character (no pun intended). By doing this, it would be easier for me to get into the persona and I will no longer have any problem jumping in and capturing perfectly the essence of the character. 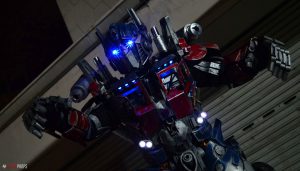 XC: What are the things that you take into consideration when preparing a costume for Cosplay?

MCB: I am such a big sucker for intricate and detailed armors that is why one of the main factors that I consider in preparing a costume is that the armors should be well-detailed and completely finished before I showcase it to the public. I would never ever release something and be proud of it when it doesn’t look decent enough for showcasing. Another thing that I consider is that the armors should be durable enough to withstand a day or two of a cosplay convention because, what will you do with those intricate details if your armor falls off every single time you walk? The last thing would be the comfortableness of the suit. I always take note that I will be in that costume for a whole day. Hence, I have to develop a way for me to be comfortable wearing it without any hindrances and difficulty that is why some of my armor parts and pieces are actually modified so that I’d be comfortable enough to survive a whole day of Cosplay. 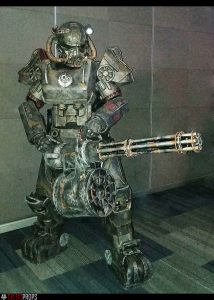 XC: Impressive doesn’t even begin to describe your work portfolio. Do you have any favorite pieces? Do you nit-pick or are you proud of all your works?

MCB: Thank you and it’s such an honor to be featured in this blog. Yes, I am proud of all my works whether it would be for my own cosplay use or for a commission project because I literally put all my time and effort on each of them. As of now, my most favorite piece is my recently concluded project, the Brotherhood of Steel Paladin T60 Power Armor. I’ve been busy with school stuff and other people’s commissioned projects lately that is why I did not have the time to make something for myself not until August, when I finally got the chance to build the Power Armor for just two weeks (because I needed to finish it for Asia Pop Comic Con). That was like a great achievement and a comeback for me. 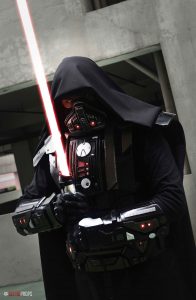 XC: If you weren’t doing what you’re doing, what expression of pop culture do you think you would be involved in?

MCB: For now, I am a costume and prop maker who builds armors, weapons and all sorts of stuff for Cosplay but, I am also currently in the mission of finding my first ever, actual full-time job in the entertainment industry as a concept artist or an illustrator. I could say that my involvement in the pop culture will not be that far from what I do as of now.

XC: Do you see Cosplaying as something viable in terms of being lucrative and a venue for creativity? 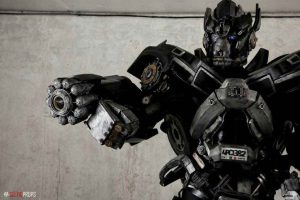 MCB: Of course. Pop culture will always be there and I don’t see it disappearing anytime soon. Great pop culture events / conventions will always have people dressing up in costume and cosplaying. Cosplay has already succeeded on helping the fans and the cosplayers be creative by boosting their passion on crafting each of their own outfits. In terms of being lucrative, cosplay has also been proven competent because there are so many fields where you can actually excel on. Take me for example. I specialize in making costumes and props for other Cosplayers. I take commissions and get paid for the project so yeah. There are other people who do Cosplay Photography where they also get paid for taking photos of certain Cosplayers. Some afford booths during cosplay conventions and showcase their stuff to sell and get more publicity. Those are just examples that I’ve stated and there are so many more things and possibilities that can be incorporated in the art of Cosplay. 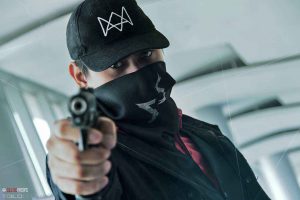 XC: Do you see the Philippines as fertile grounds for your craft/hobby to advance further?

MCB: Honestly speaking, for the long term run, No. I don’t see the country being so welcoming to these types of costume and prop-making jobs. Cosplaying maybe, but the actual production thingy? I am not sure. Materials are expensive and hard to find in the country as well, that is why it is a bit difficult for me to excel even more with Hollywood type of prop-making effects. 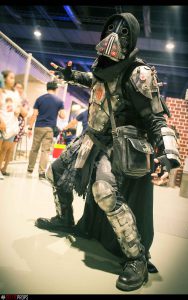 XC: Do you see yourself as one who contributes or had contributed to the Philippine pop culture through you Cosplay?

MCB: I hope? Hahaha! But I’ve been in the Cosplay community since 2008 and have already encountered and helped a bunch of newbies wanting to enter the scene and I can say that I’ve been successful in boosting their curiosity and passion on being creative in terms of crafting. Also by showcasing my works, I have received great feedbacks and comments regarding them being inspired and motivated to do one of their own dream Cosplays and that is the main reason why I actually Cosplay: to express myself and inspire others. The joy of helping others on their craft completes me.

XC: Is Cosplaying something you would be doing for the long run?

MCB: Uhmmm… Depends on the type of job that I would get? XD If I would be accepted in a big, full-blown special FX industry like Stan Winston Studios, Amalgamated Dynamics Incorporated, Legacy Effects and the like (which is my actual goal) then probably yeah, I will be using the skills and knowledge that I will get from there for my Cosplays. But honestly speaking, I will never drift too far away from what I am currently doing because I love it and I will never, ever grow tired of it because as I’ve answered on the first question, I’ve been doing this since I was a kid. So, literally speaking, this thing already consumed almost 80% of my life and I wouldn’t want to just throw it away.

XC: What piece of advice or message can you give young aspirants wanting to enter the discipline?

MCB: Start small. Start with the smallest prop or simplest costume possible because it’s actually a progression sequence. A baby didn’t walk without learning how to crawl. Same goes with crafting. You cannot build those intricate detailed costumes, massive Mech armors and awesome weaponries without knowing the basics. Take it slowly and you’ll realize when you are ready to take the next step until you get to where you wanted. Also, never ever forget to have fun and enjoy what you are doing because that is going to be your foundation. That is the key for you to not get discouraged easily and motivate you instead and help you push yourself even more. Go out, express yourself! Happy crafting and cosplaying! 😀 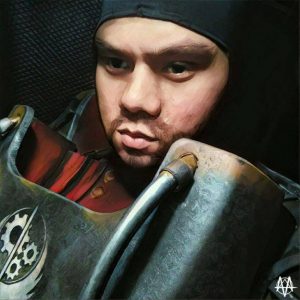 Creatives like Mark are the bearers of innovation. And while we ain’t going to pick up a costume, or much less grab a rubber matting and start making one, Mark’s creativity inspires us to find our passion and make it grow.