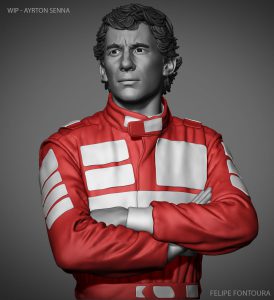 Educated at Melies under the Digital Sculpt and 3D Illumination, Mr. Felipe Fontoura Silveira Leite is a Brazilian artist who has established his place in the 3D industry.

At 29 years young, he already has an experience of 5 years creating 3D art. And he learned the ropes through one thing: constant practice.

Having the enthusiasm as a kid, there was an ease of immersing himself in the trade. Eventually, with the years of learning various software, the definitive of which was his experience being Zbrush, Felipe realized that creating 3D art was something that he would want to do for life.

So today let us get to know Mr. Felipe Fontoura Silveira Leite and see how a childhood hobby eventually became his life’s work.

Xeno Creatives (XC): How did you get involved in the 3D industry? Did you have an AHA moment that that led you to say to yourself, “THIS IS what I would want to do for the rest of my life!”

Felipe Fontoura Silveira Leite (FFSL): I started studying 3D in 2013, but I always enjoyed animations, movies, which had me start drawing since I was a kid.

I guess I had this moment. It happened when I made the first contact with ZBrush, when I discovered the 3D market and got acquainted with some Brazilian professionals who are incredible. These made me realize that it was possible to work with 3D. It became apparent to me that it is what I wanted to do for the rest of my life. 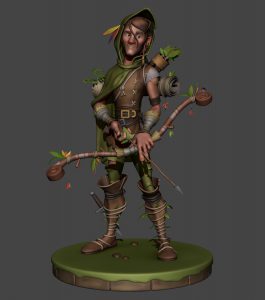 XC: What were the things that you had to go through to become a 3D artist? What is it like being thrown into the culture?

FFSL: We have to dedicate ourselves a lot; practice a lot. In the first two years, I only studied because I was working with system’s analysis at the time—which was my course in college.

I did some courses that opened my mind about the area at Melies school, it opened my mind to the market and it was very important for me to enter the 3D industry, leaving the IT area.

XC: What or who influenced you the most? Was there ever a digital art piece or artist who solidified your place in the discipline?

FFSL: I always enjoyed watching movies, cartoons, and anime, so there are lots of movies and animations that had inspired me. These media include Lord of the Rings, Jurassic Park, Pixar and Disney animations, and Studio Ghibli animations.

XC: What’s your workflow like? Could you describe how your day runs in production? 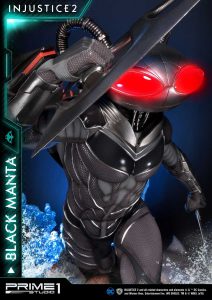 FFSL: I usually use ZBrush and 3Ds max for modelling, Substance Painter for textures, and finish with 3Ds max.

When the character requires a different touch or movement for cloth, I usually use Marvelous Designer because it is more productive, it helps a lot, although I really enjoy sculpting fabrics.

XC: What are the common hurdles or challenges that a 3D artist like you encounter day-in, day-out in a project?

FFSL: If it is a personal project, we need to have the focus to finish. It is important to keep the practice in software too, to study something that you can add to your pipeline. As a professional, be as efficient as possible. Deliver on time. Always clarify doubts or suggestions. Understand the requests of the client. These are very important.

FFSL: The biggest challenge for me, and what I liked to see finished, was Yoshimitsu from Tekken which I made for Prime 1 Studio. They revealed just a few photos of the statue, that’s what I liked the most.

XC: If you were to market yourself as a 3D artist, what would you highlight as your strengths, your edge?

FFSL: I really like to model and sculpt so I’ve always tried to show it as my strong points. I hope one day it can be something that can make a difference.

XC: If you weren’t a 3D artist today, what could you see yourself working as? 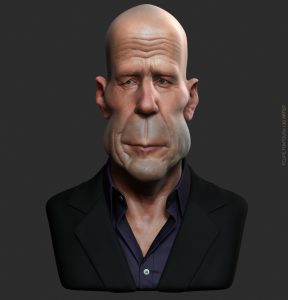 FFSL: I would probably be an illustrator. I have always liked to draw since I was a kid. However, I didn’t know the market before. Today knowing it exists and that it’s incredible, it tremendously attracts.