And The Battle Rages On: DC Releases New Teasers For “Injustice 2”

While DC had been getting smacked for its creative decisions with its Cinematic Universe, gamers know all too well that it had been making it big on its Game Universe.

Whetting the appetite of players all over, the weekend saw the game’s official Twitter channel tease a GIF of Superman with a mysterious female figure. 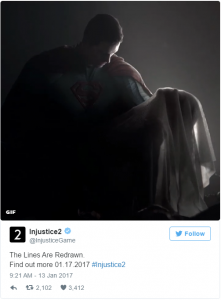 DC Comics’ Twitter account followed it up with another teaser, this time seemingly with two embattled heroines. The community speculates this to be Supergirl and Wonder Woman. The tease gets more interesting with the caption,”The Battle Rages On”

With these teasers out, we can’t help but be intrigued. But as the developer, NetherRealm had said in a reported statement, we would have to wait until the 17th of January for the full details.