An Impressive Curriculum Vitae: The Art of Candie Quach 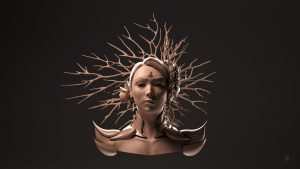 At the young age of 25, Candie Quach already has quite a Curriculum Vitae. She graduated from Shawnee State University under the BFA program in Digital Design. She also entered three schools of repute to further her expertise in the digital arts field.

Candie enrolled at the Gnomon school of visual effects specializing in Sculpture, the BrainStorm school where she tried her hands in Character Design, and the Glendale Community College where she learned Photography.

To date, Ms. Quach has already been in the digital industry for 4 years. She had been a Concept Artist at Intel Studios where she worked on an award-winning,  VR Music Video/Short Film “Runnin’” by Reggie Watts for the SXSW Film Festival. Candie also worked as a Creature artist at Lucid Dreams Productions for the Tribeca Film Festival for yet another Award-Winning piece, this time, a VR Short Film entitled “The Key”.

Candie was also a 3D Generalist at a visual effect studio called Telexist VR for Raindance Film Festival the VR short film, “Dinner Party”, which, keeping in line with the quality of her work, reaped a number awards.

For The Glitch Mob’s recent album, “See Without Eyes”, Candie worked as a 3D sculptor for the album cover. She was also a Character artist and generalist for other VR projects at High Fidelity, Moth+Flame VR, and VR real-estate Virtual Xperience.

At present, Ms. Quach is using her talents as a Character and Look Development artist for Augmented Reality at LivingPopups. Alongside, she is a Digital illustrator for the Children’s book “Passages from a Creature of the Night” by author and film director, Donnie Oceans.

On top of these, Candie is also a member of the Creative Circle and Women in VR/AR. 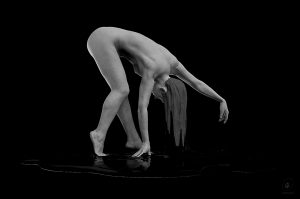 With all these experiences, it is of no surprise that Ms. Quach’s work is one indicative of experience and mastery.

Xeno Creatives is more than honored to have been given the chance to interview her to get to know how she goes about work, how she got to where she is, and how far her trajectory is as an artist.

Xeno Creatives (XC): Has producing 3D art always been a passion for you? How did your involvement in the 3D industry start?

Candie Quach (QC): I grew up in Hanoi, Vietnam with a traditional art background. My brother and I started doodling since we were three and we would draw on page after page of scrap paper all over the place, so drawing has always been the core passion for both of us. My father’s career as a show set designer really inspired me to go into the entertainment art industry as a young kid. I decided to study abroad in the U.S. at a small town school called Shawnee State University in Southern Ohio, majoring in graphic design. Out of curiosity, I took a 3D modelling class to see what I could do. Unsurprisingly I barely passed with a D+ which pushed me to try again harder. Once Maya and ZBrush didn’t seem like a total confusion anymore, I picked up the modelling/texturing workflow quickly and started to love creating assets like houses, furniture, appliances, etc. That was when it all started. I didn’t know exactly what particular direction to go for 3D, so my first job during my junior year was a generalist for a real-estate VR company (modelling, texturing furniture, rooms, accessories, recording fly-through scenes, etc.)

XC: Would you say you already have a solid place in the industry? What’s it like being an
active part of it?

CQ: I wouldn’t say that I already have a solid place in the industry yet since I only have about 4 years of experience and the industry I chose is VR/AR which is pretty young still. But regardless of what divisions of the 3D world I’m in, there is always an opportunity to meet up with other fellow artists. It’s a very close and relaxed community where people are so open to help and learn from one another. I love going to Zbrush Summit, Siggraph, CTN, Monsterpalooza, and other conventions to create connections and see what others are doing with their art for inspirations. 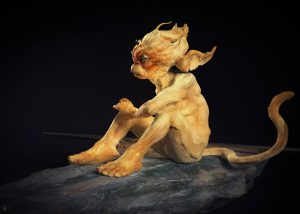 CQ: I’ve always enjoyed traditional drawing and sculpting, and I’m driven to transform my illustrations into digital 3D to see them come to life. I also like to emulate the essence of a clay sculpture in 3D. There are many great artists that I look up to, whose work demonstrate a beautiful blend between fine art and 3D concept, such as Maria Panfilova , Philip Harris-Genois, Beeple, Anthony Jones, Dom Qwek, Lee Griggs, and Alexander Lee.

XC:How would you describe your day in production?

CQ: I work mainly as a freelance character artist for different types of projects and productions – most of them are VR/AR games. When I work online, we communicate mainly using Slack, Discord, and Trello. I receive either a specific direction of concept art or just general ideas from the art director/ art lead on how the character should look. Then I update them throughout my process starting from general mesh block out, sculpted details on high resolution, topology, baked maps, and textures/shaders. Normally I’m given from one to two weeks to finish a game character (depends on how complicated the model is) so I would give myself about 3 days before the deadline to go over details that needs to be fixed with topology, UVs, and textures. 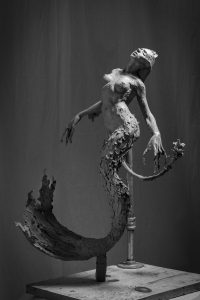 The pipeline is mostly the same when I work onsite in a studio, except the feedback is more direct, and it’s easier to problem-solve with the art lead, riggers, animators, and developers. The current company that I’m working onsite with (Living Popups) doesn’t require very complicated models/materials since their style is stylized and low poly. So the timeline is more relaxed allowing me to experiment more with concept art development and software applications. I’m very happy to be working with the small team at Livingpopups where I find freedom to express my creativity through their variety of AR character creations. Everyone here is always eager to help, encourage, and learn from one another in order to improve together.

XC: What are the common challenges that a 3D artist like you encounters day-in, day-out in
a project?

CQ: I think the common challenges are circling back to fix little problems that emerge later during the production, especially while importing models and maps to the game engine; or sometimes sudden changes of concept halfway through, or unclear direction from the director and miscommunication from other team members. These can all add up to create stress when there’s a strict deadline. When I was a 3D freelancer, I had to stay on top of my schedule while having several projects at the same time, sometimes with overlapping deadlines; or on the other hand, stretches of time between projects when my clients didn’t need any work.

XC: We’ve seen your works. Your collection is haunting; it leads one to contemplate its beauty. We are interested with the backstory for each creation. Do you have favorite pieces? If so, what would these be and why? Also, what would you consider your biggest or most exciting project to date?

CQ: When I look at my own collection of work, I’m aware that my style and approach to 3D art have been changing over time for the better. But I always want to go back and fix something with every piece that I have done and that can be unhealthy! We need to move on to the next projects and learn from old mistakes -no one should be working on one piece of art forever. 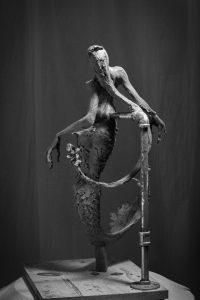 CQ: Thinking of favorite pieces, I would say the “Monkey King” and the “Little Mermaid” are my recent favorites. I love figurines so I decided to take a sculpture class at Gnomon to dive deeper into the anatomy, forms, flow and expression with my sculpture “Little Mermaid”. I wanted viewers to feel the moods being reflected on them when they look at her face, body and hands. It could either be relaxation, freedom, solemnness, or even pain – it depends on how each individual interprets it.

For “Monkey King”, I wanted to experiment with brush strokes and clay-like forms in Zbrush. It was the first time I ever sculpted a creature/ animal-like figure like this, so I would say that probably was the most exciting project to date. The look that I was going for inspired heavily by sculptor Beth Cavener. It was quite a challenge trying to imitate the expression that could only be done with hands and fingers on clay to Zbrush. I figured out a few basic tools that could help me move forward quickly: Clay Buildup and move tool with a square alpha, and using Trim Dynamic instead of the smooth brush for cleaning up the forms. I find my direction leaning towards artists like Maria Panfilova. She really takes the fine art element seriously in her sculptures from start to final renders, paying close attention to anatomy underneath the skin, composition and lighting.

CQ: Since I started, I have worked as 3D modeler, character artist, concept artist, and digital illustrator, so it depends on which industry I’m associated with to market myself. I guess in the 3D world, I stand out more in facial likeness and detail sculpting than the other skills. However, in the tech industry that is evolving so fast with artificial intelligence nowadays, I think it’s better to be fluent in many skill sets and flexible as much as possible in order to take advantage of new coming automated software without falling behind. 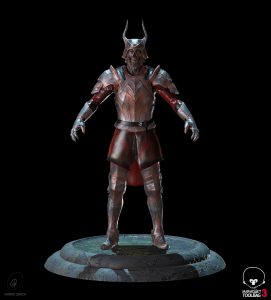 If I wasn’t a 3D artist today, I think I probably would have been a graphic designer for a while, and then eventually changed my mind and become an illustrator. Or I could have done any number of other traditional art media since I have always loved drawing, painting and printmaking as well.